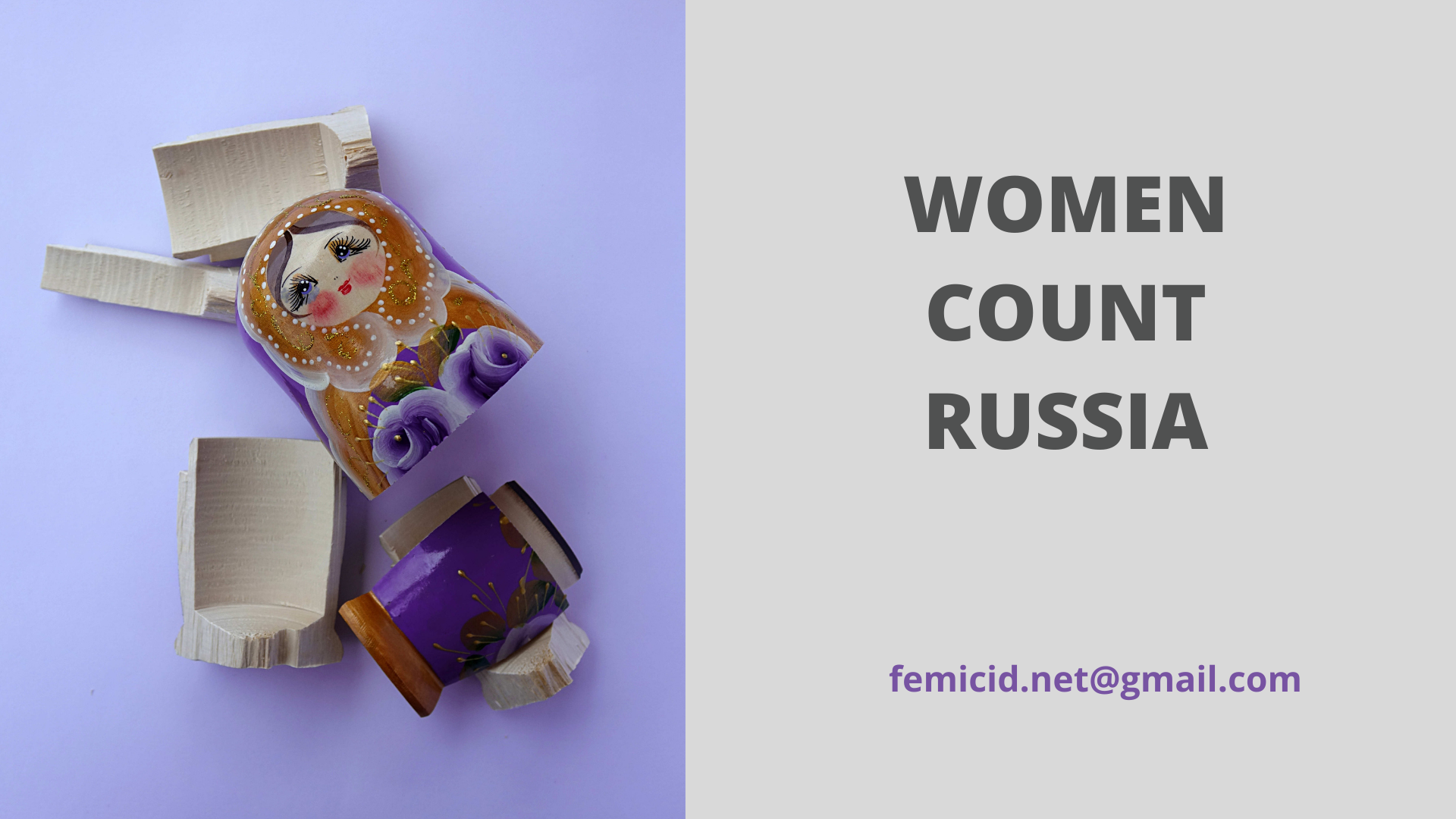 This is a speech from the #FiLiA Portsmouth conference on October 16, 2021. 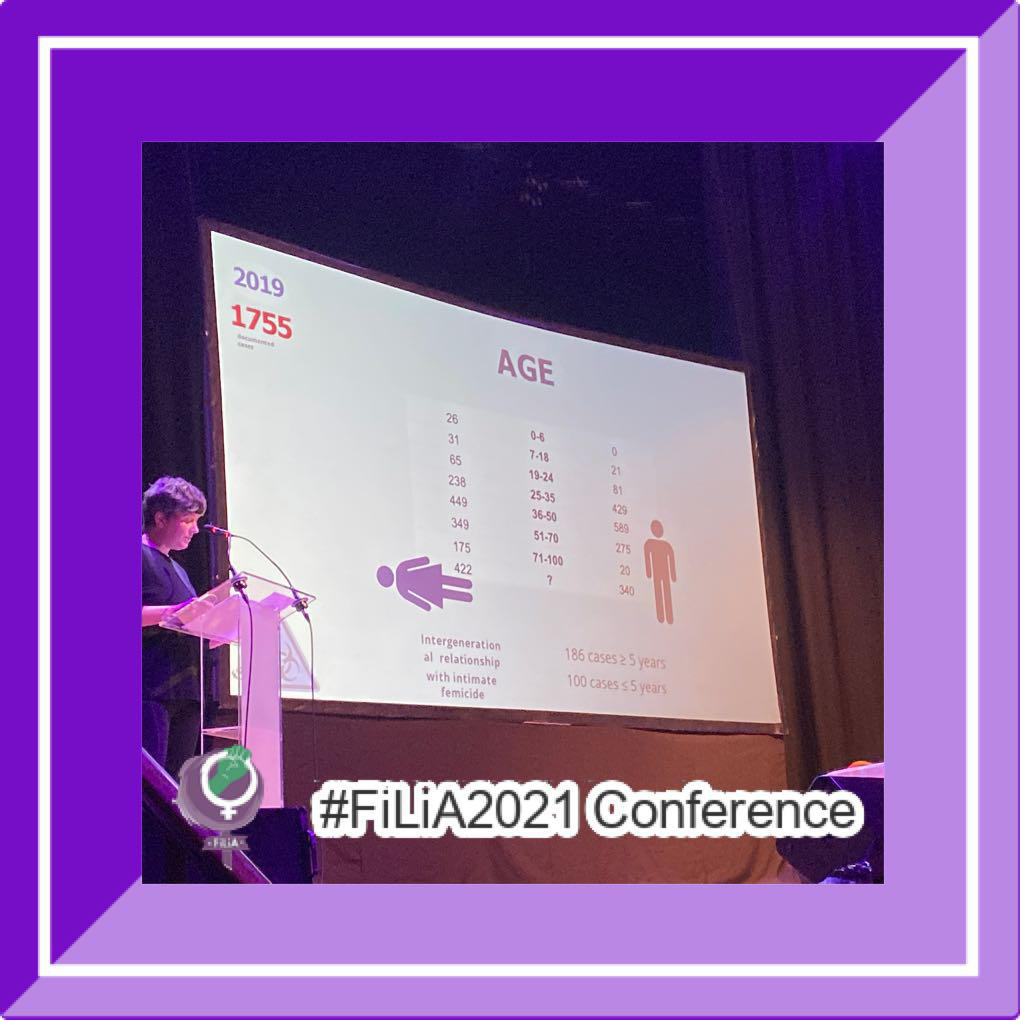 Hello. My name is Lyubava Malysheva. I am very glad to participate in this conference and to present a report about femicide in Russia.
Our project is femicid.net. 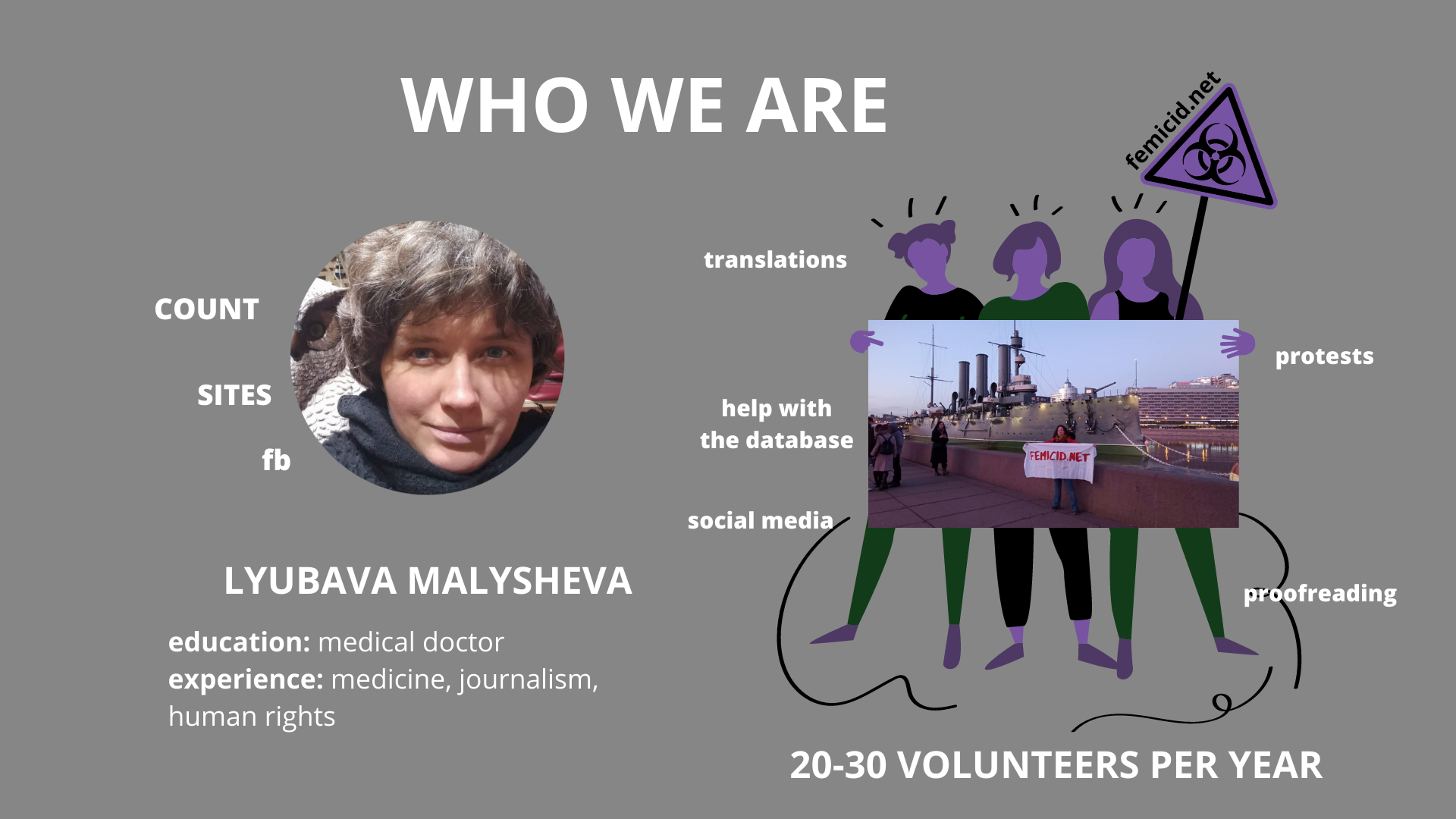 Between 20 and 30 volunteers each year work on the project.

Here are some photos from Russia. They show our banners, posters and yearly reports. 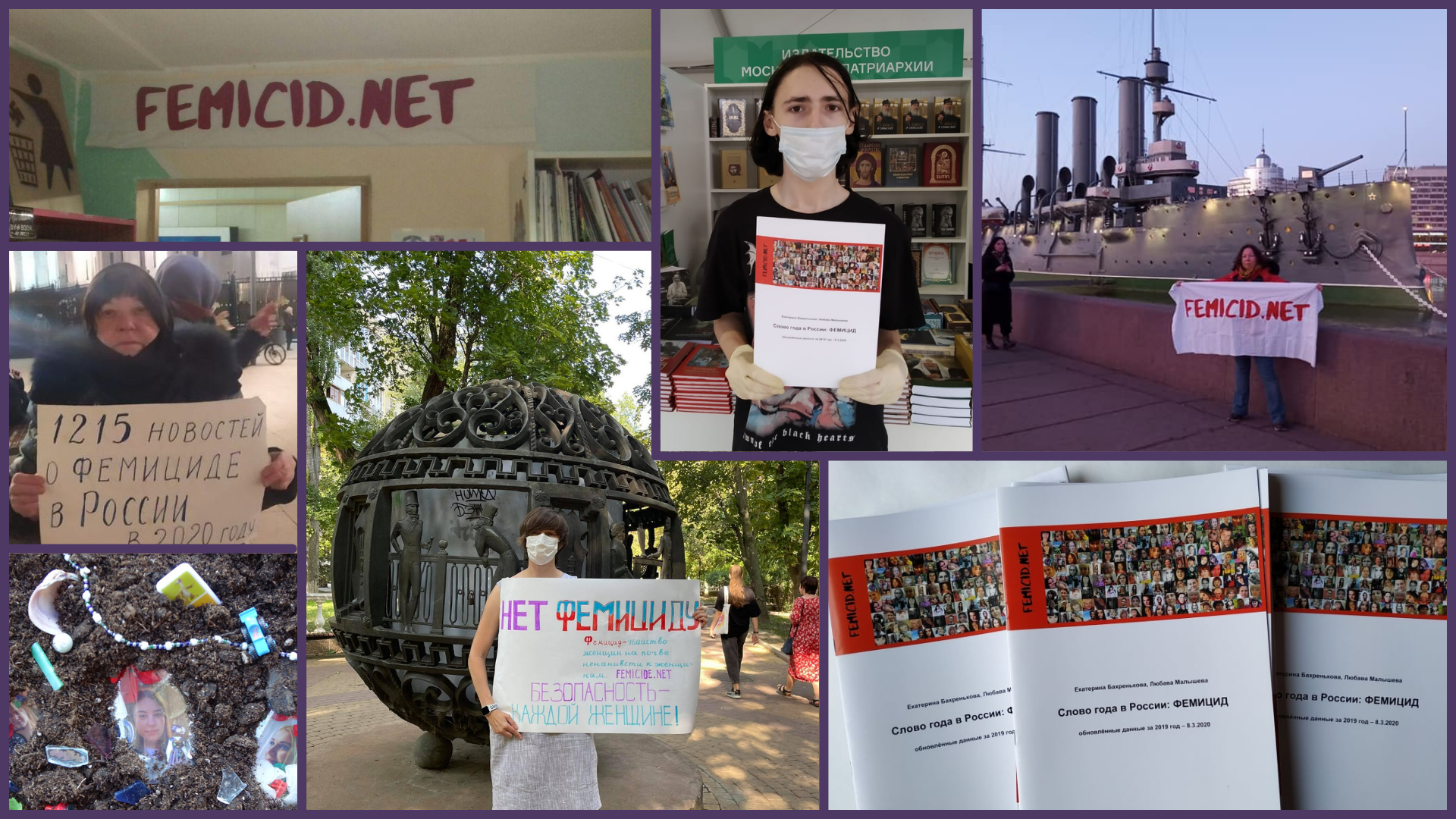 Our definition of “Femicide” is the killing of women by men on the basis of hatred of women, or because of negligence from the patriarchal interests of the state. 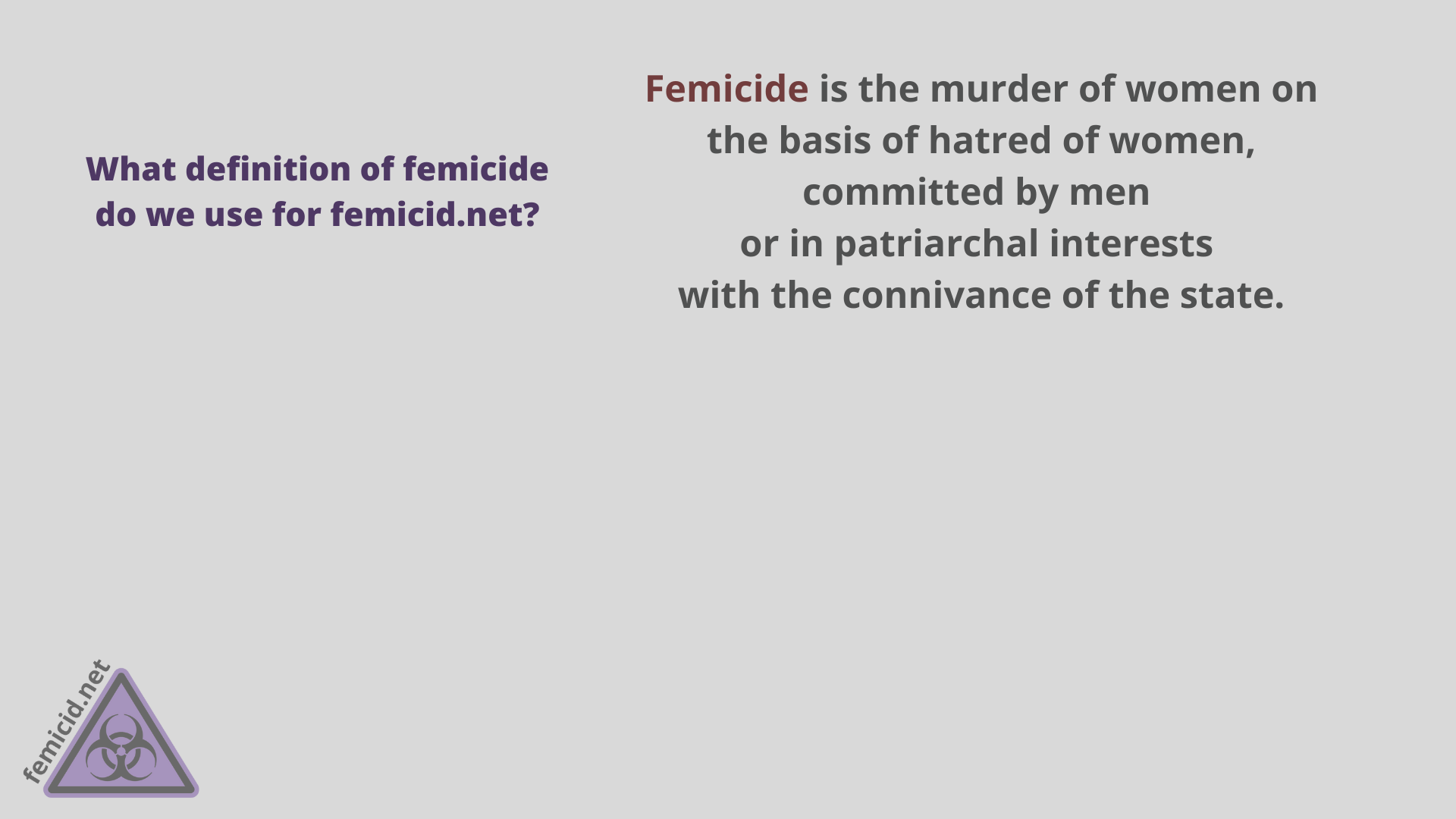 What is the definition of femicide used by the Russian authorities and journalists? There is none. 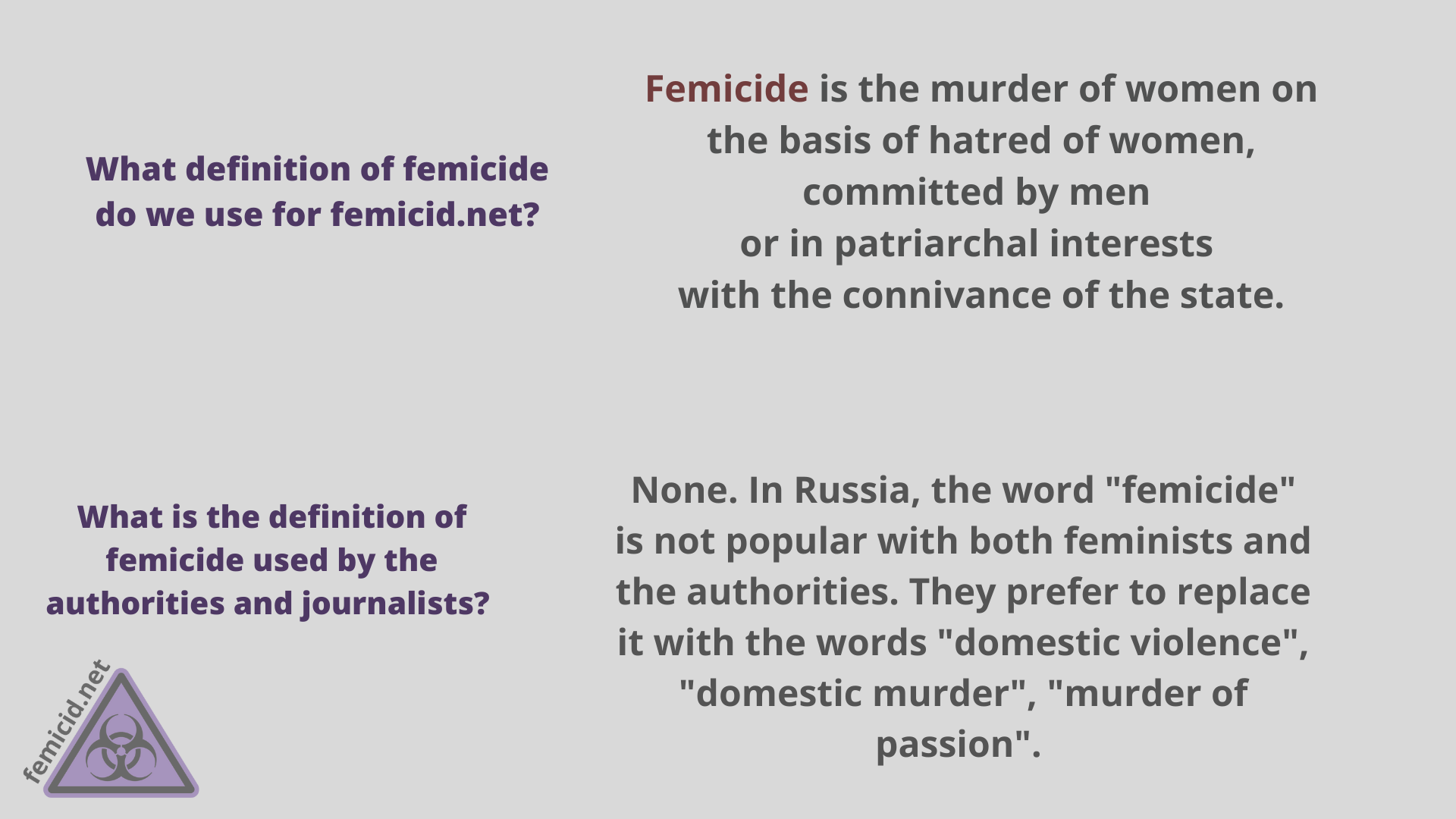 In Russia, the word “femicide” is not popular with both feminists and the authorities. They prefer to replace it with the words “domestic violence”, “domestic murder”, “murder of passion”. 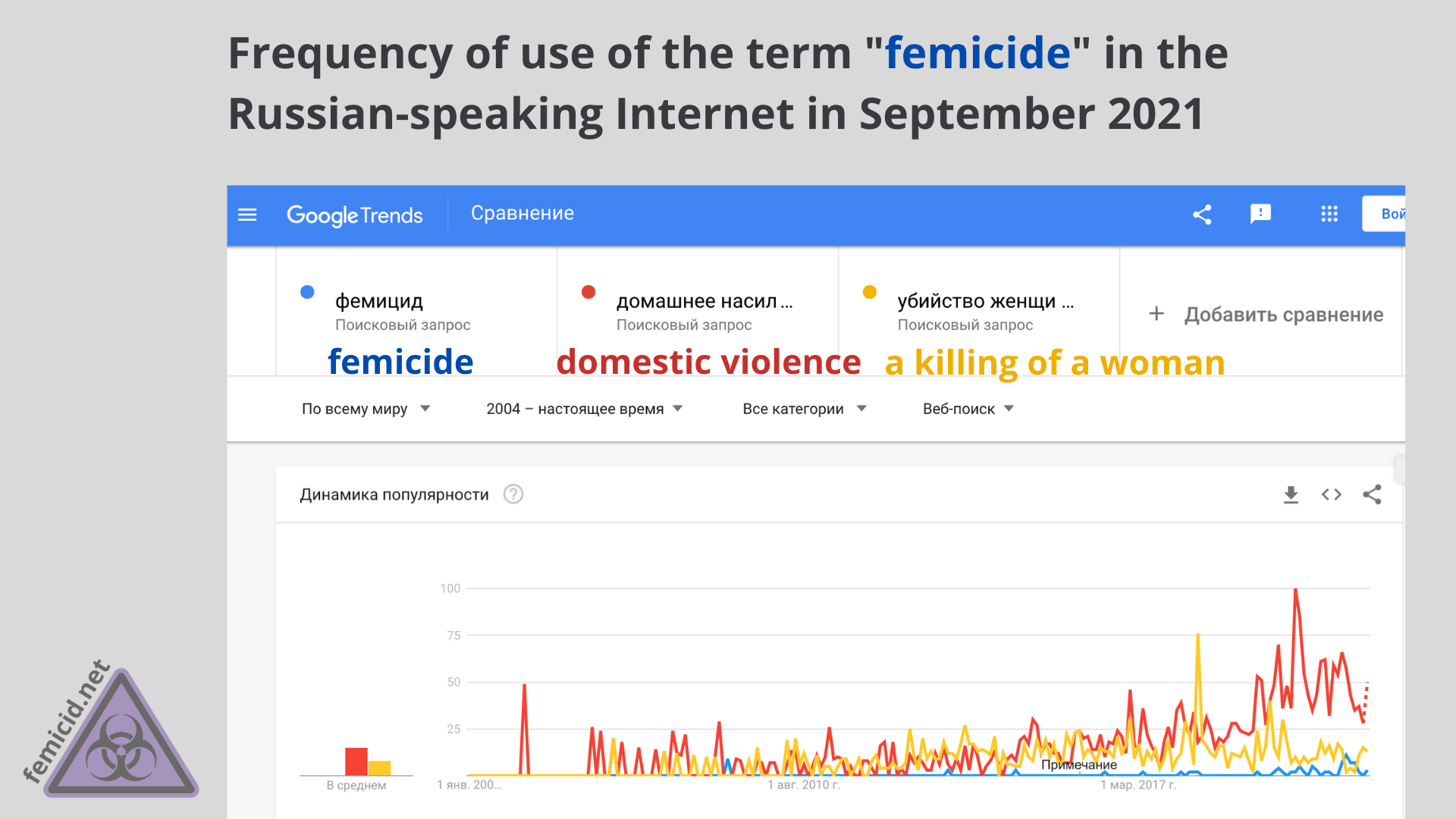 What are our sources? We use Google alerts and regional sites of the Russian Investigative committee. 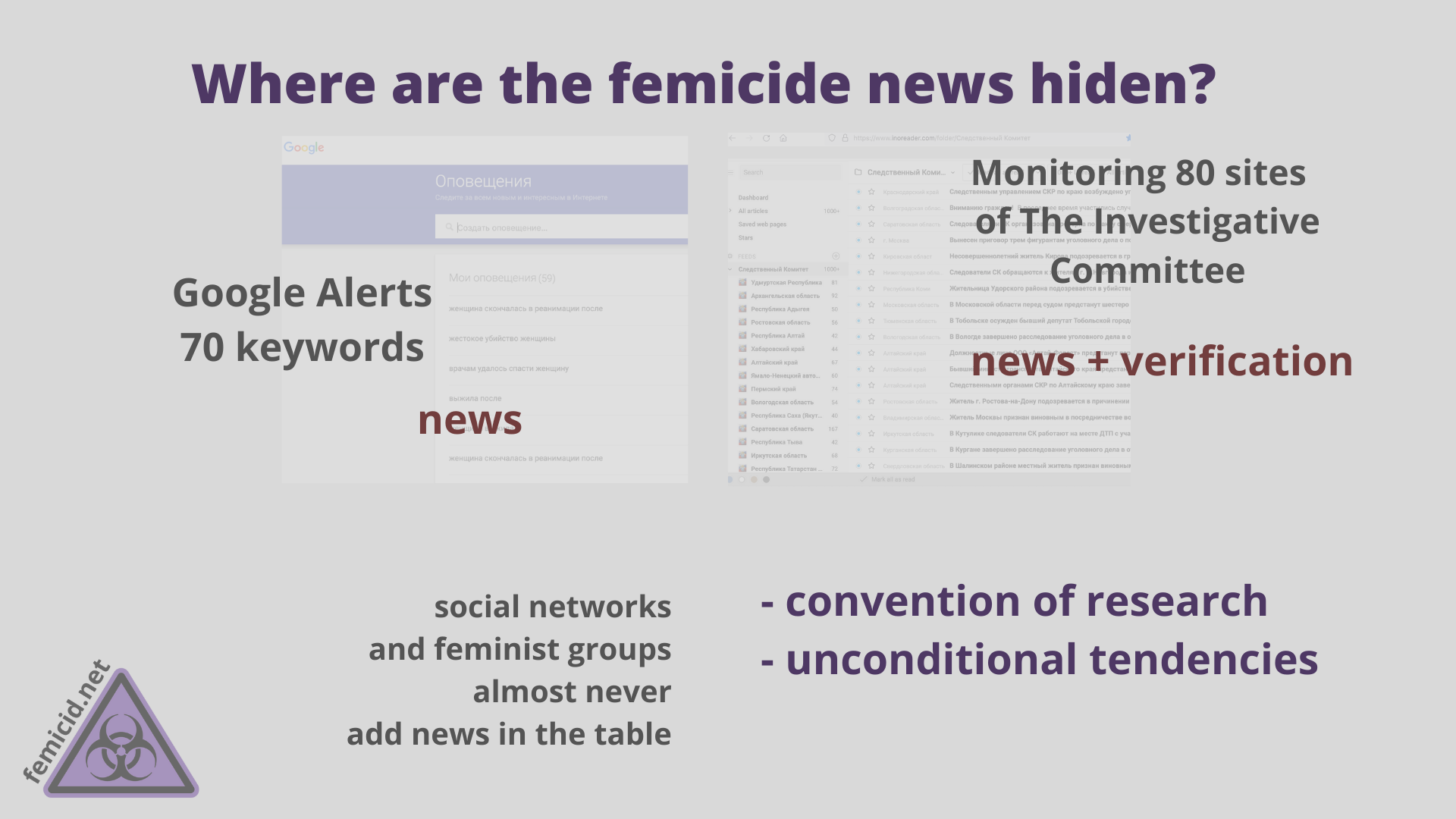 Many murders are not included in our statistics. 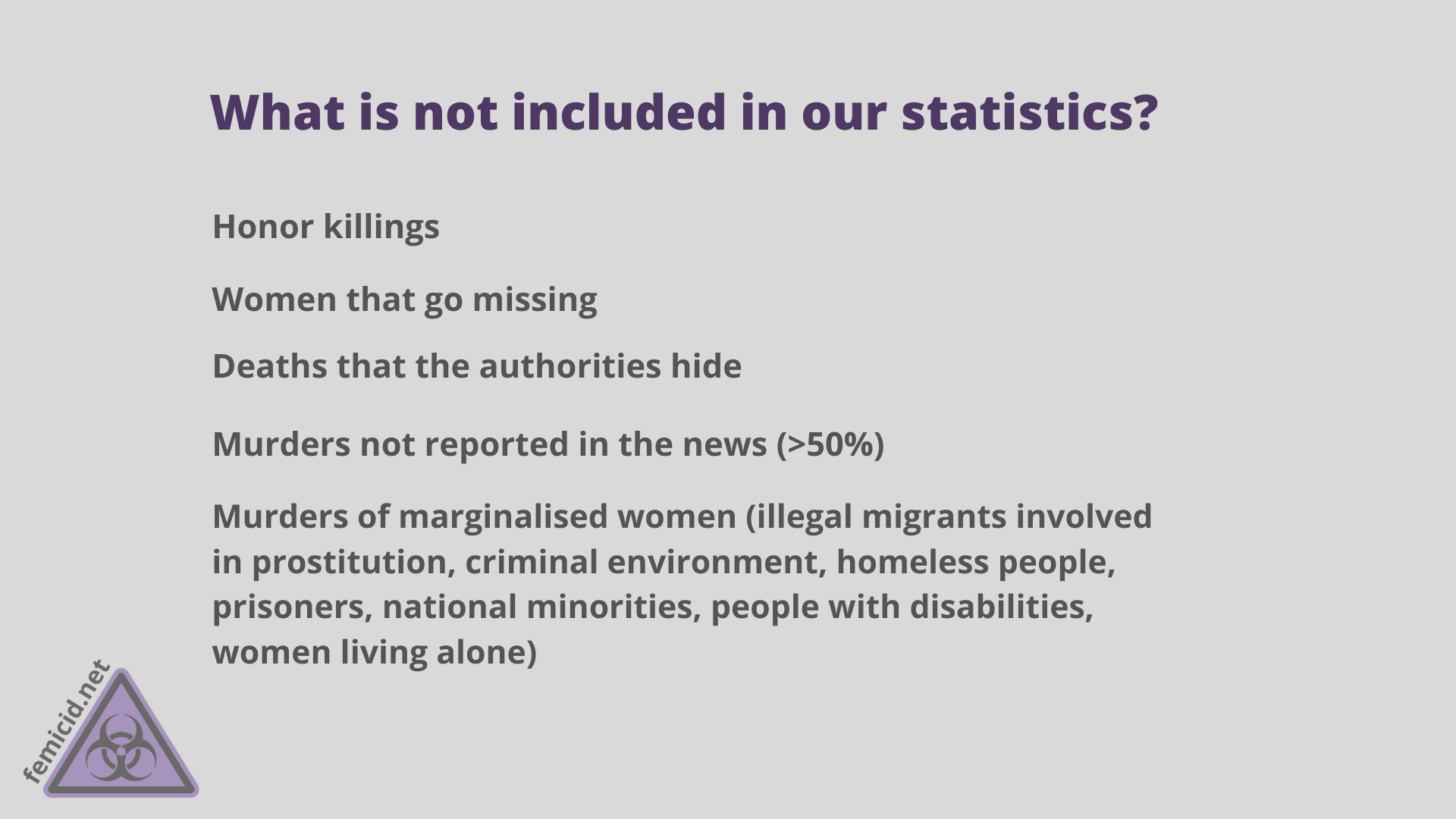 The femicide rate per 100 000 women allows you to compare the situation in different countries. For example, in Spain the femicide rate is 0.5, and in Germany it is 1.1. 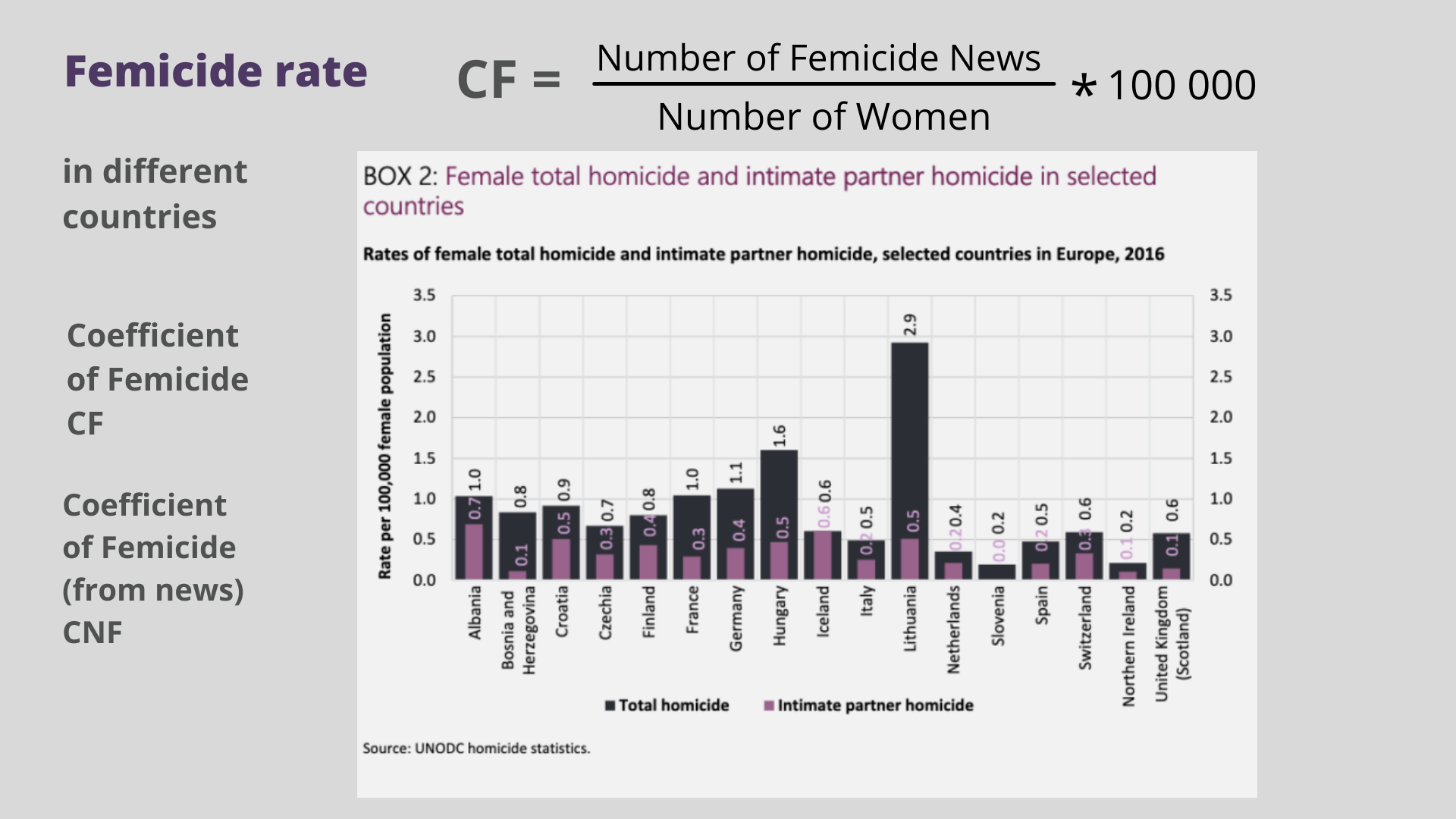 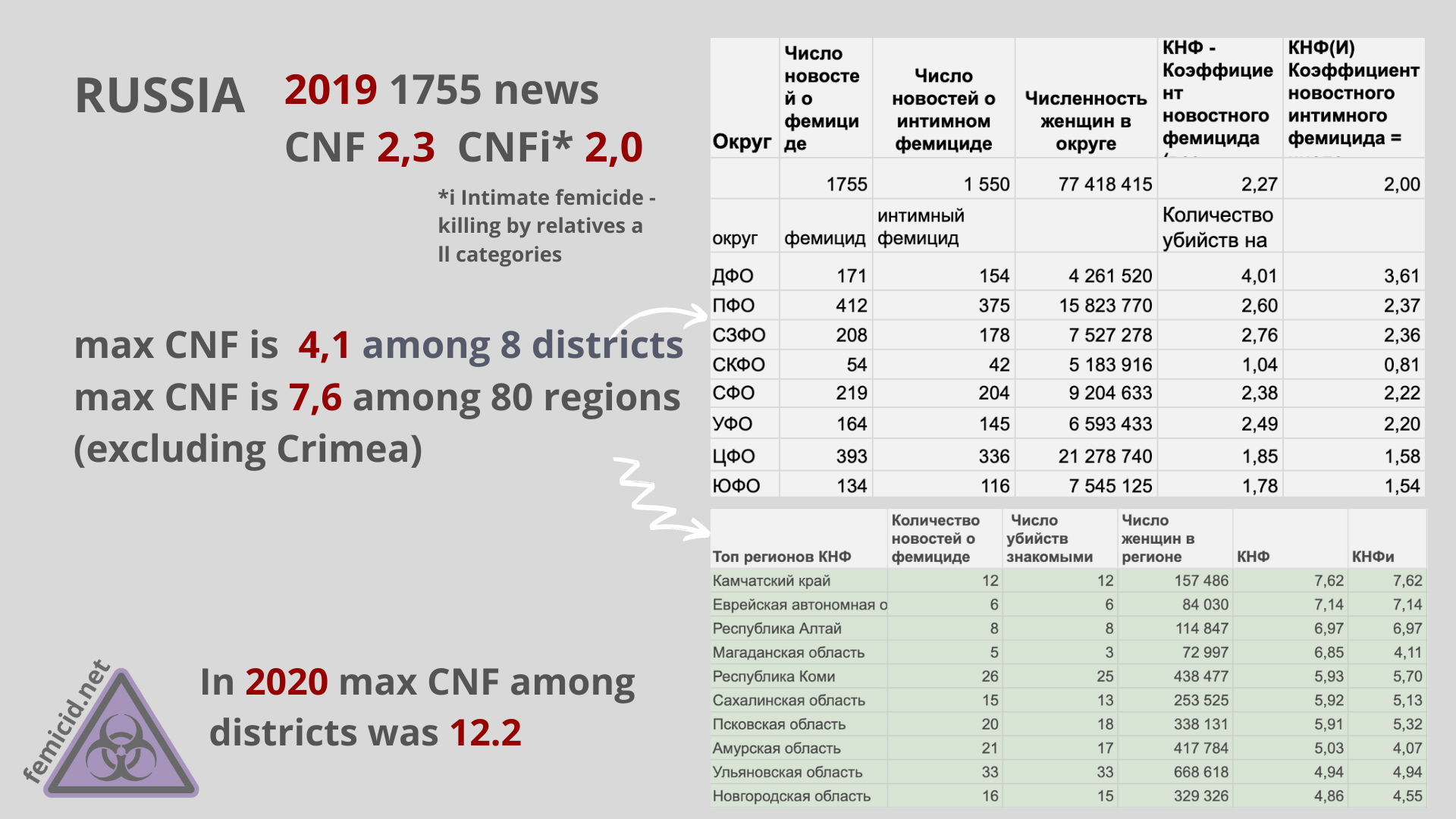 What can we learn from the statistics?

First, let’s look at the ages of the victims and murderers. Women get killed starting from their birth. It shows that men are dangerous at any age. 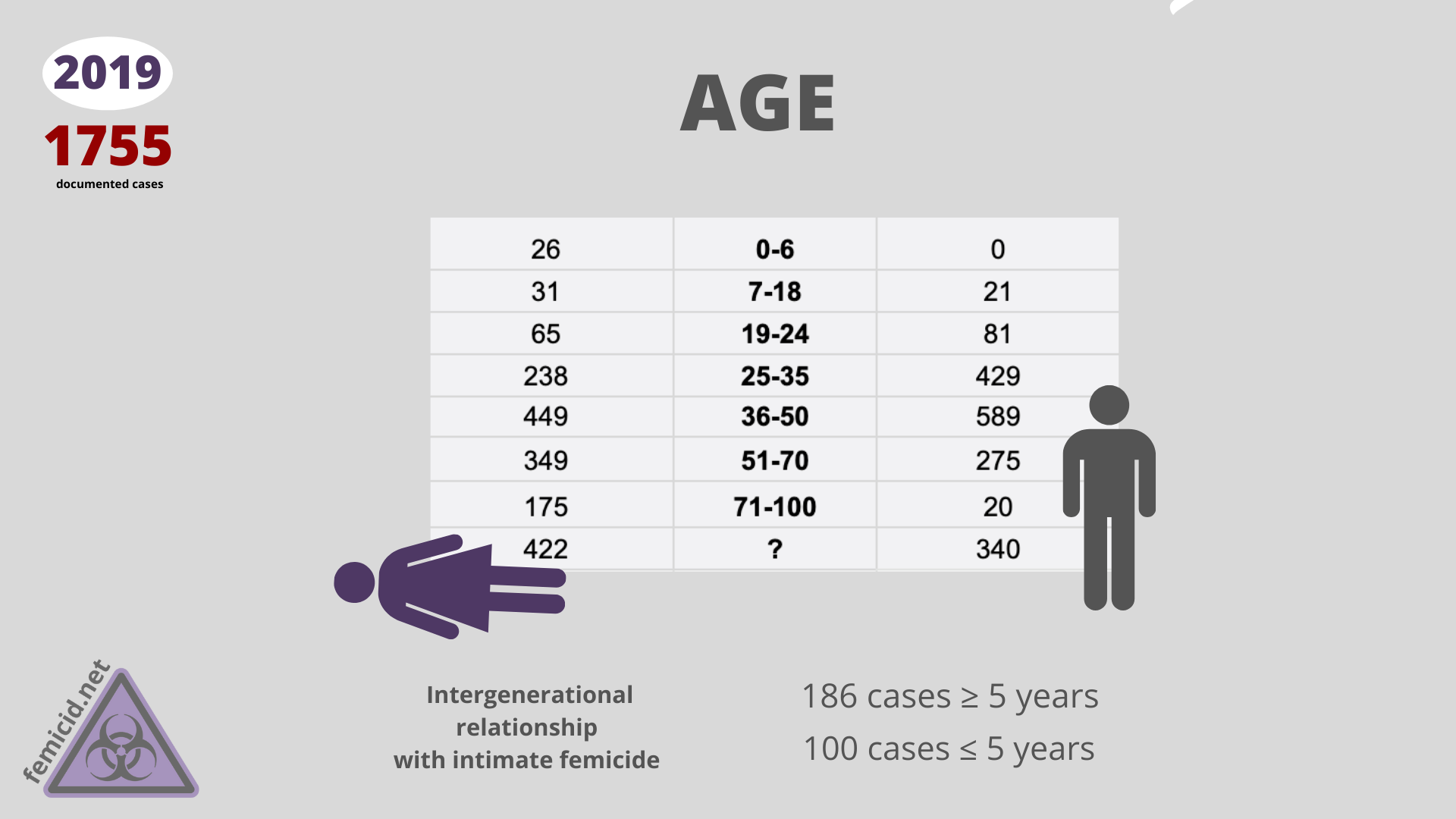 Let’s now look at the relationship between the victim and the killer. The greatest danger for women comes from intimate partners, both present and former, familiar men. It is not customary to talk about this, but sons and grandchildren are also dangerous to women. 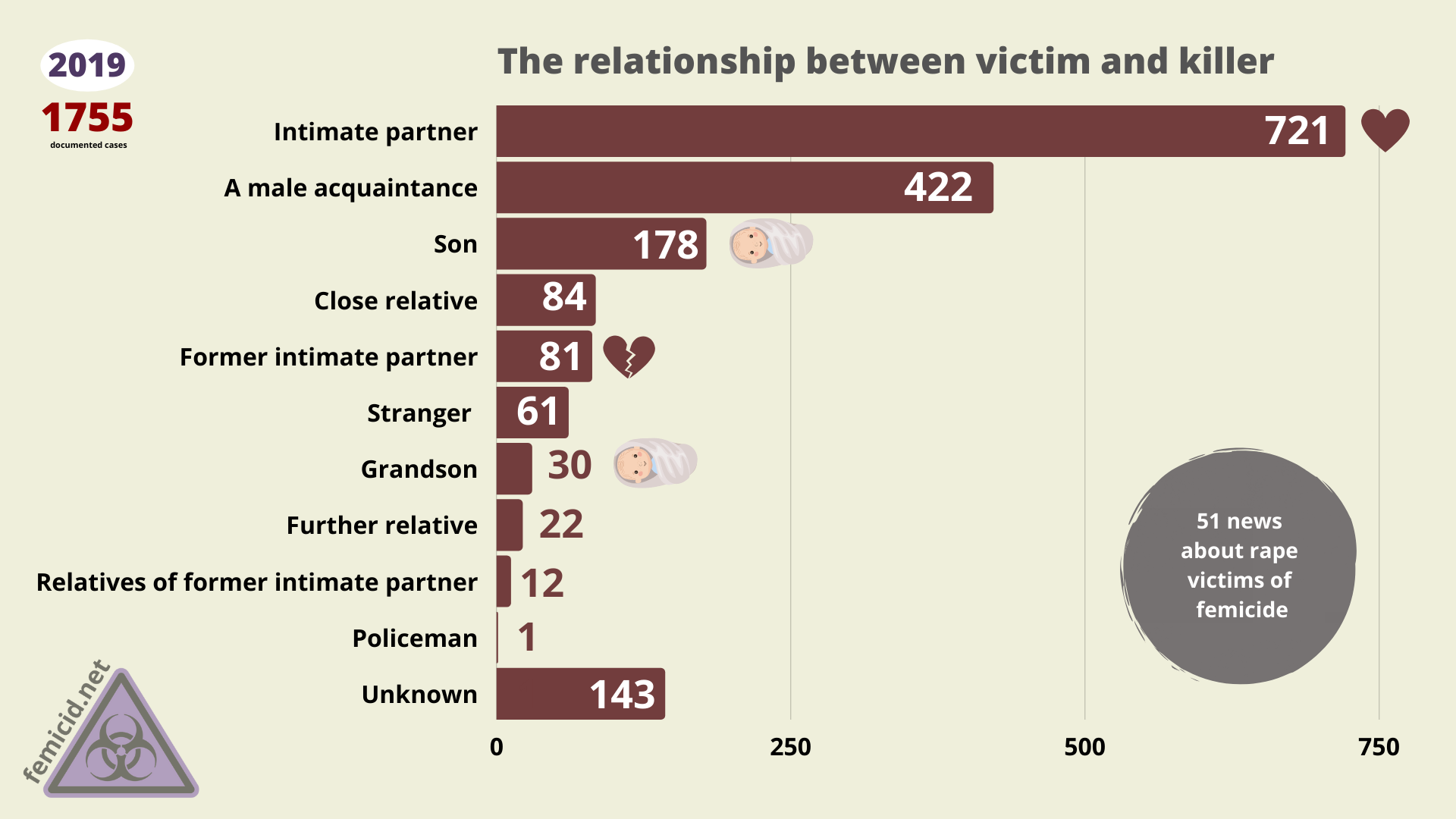 What do we know about the victims of Russian femicide? We don’t know anything about most of the killed women. When we know details, the victims are most often pensioners, saleswomen, schoolgirls, businesswomen, unemployed, involved in prostitution, homeless women, students and medical workers. 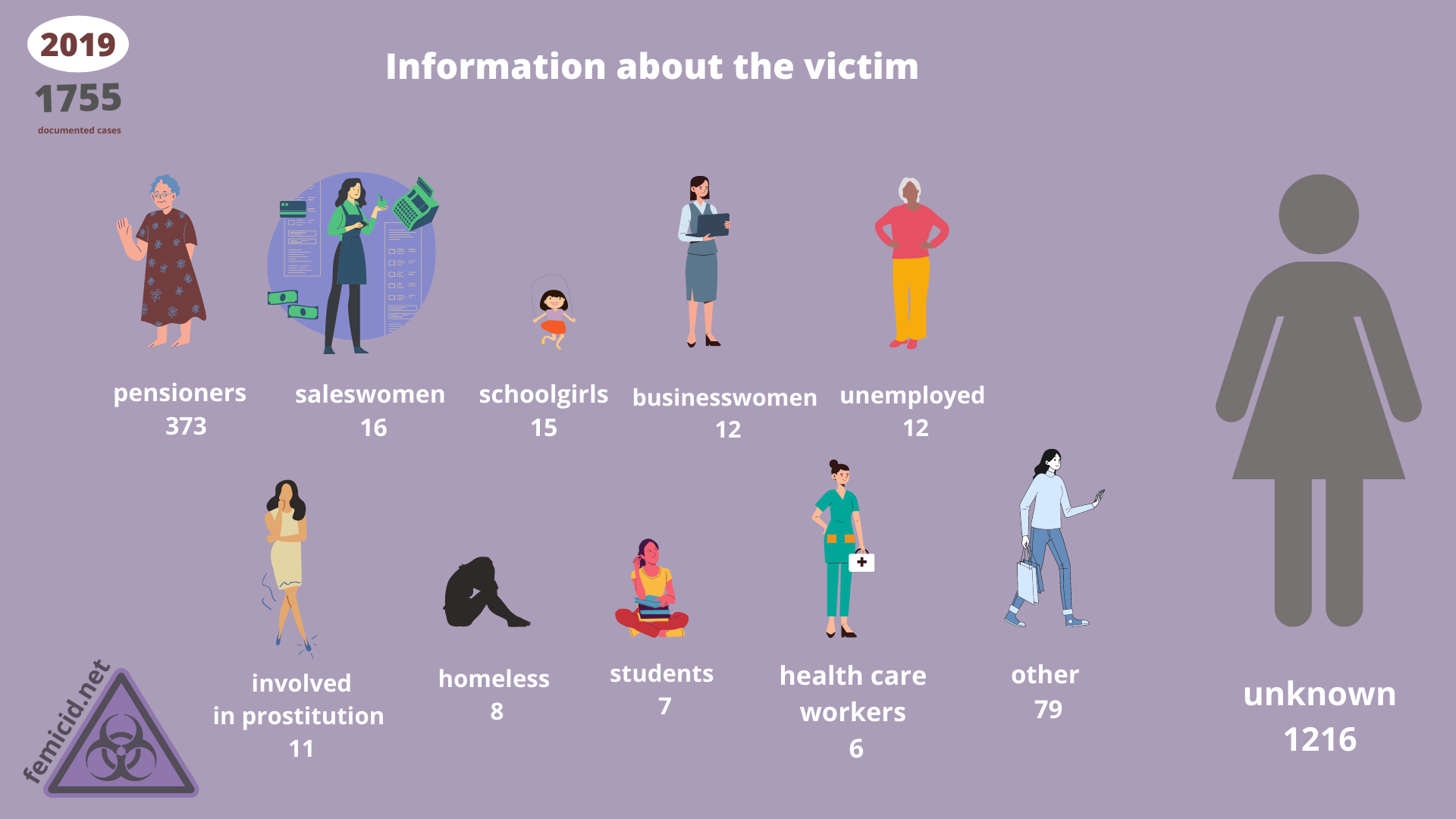 What about killers? When we know, they are unemployed, pensioners, drivers, policemen, homeless men, students, servicemen and schoolchildren. 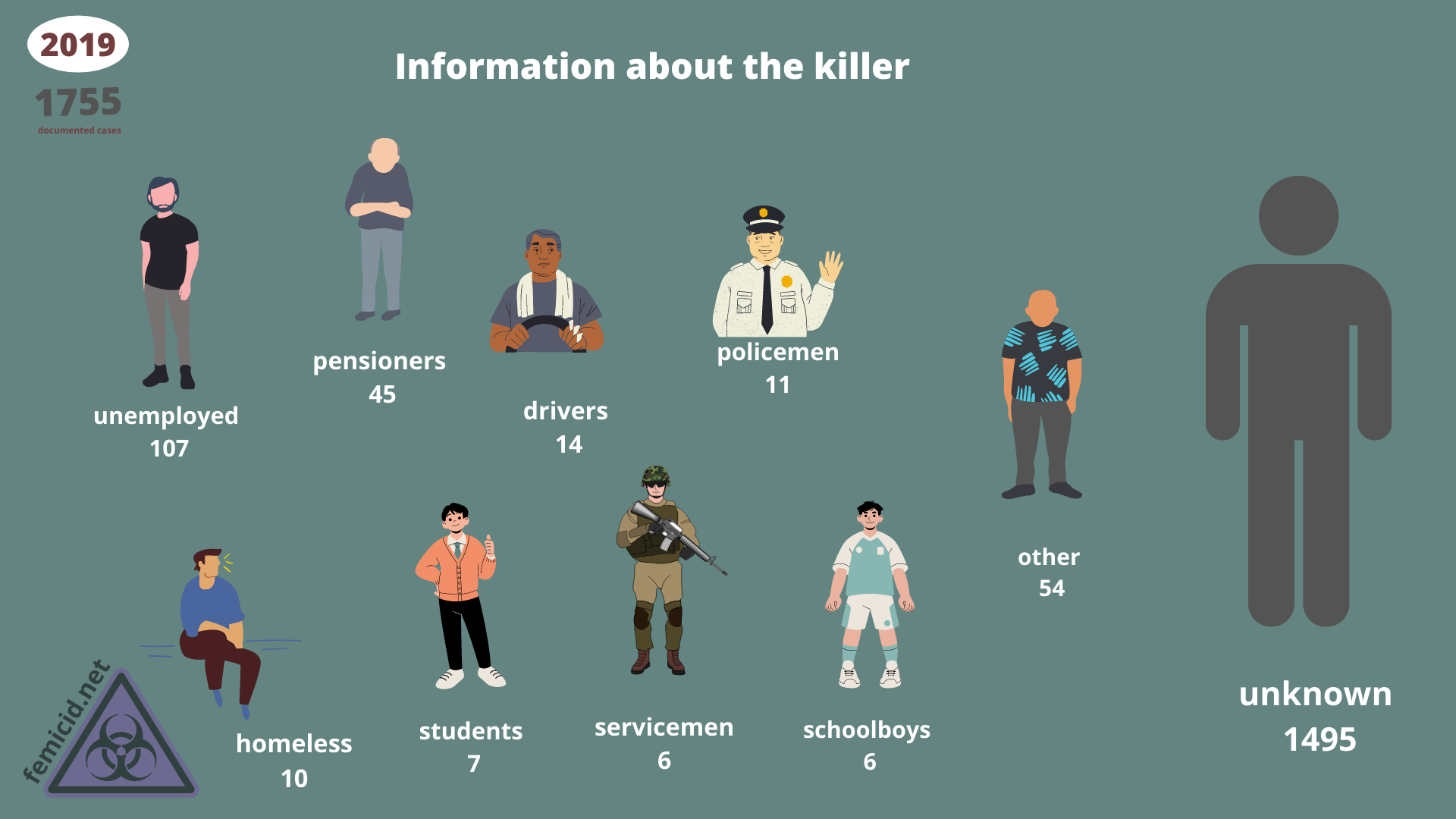 We know the method of murder for almost all the cases. Beatings and murders with a knife are typical for Russia. They are followed by strangulation. Murders with occurences of arson, dismemberment and the use of firearms are the most socially dangerous, and get presented by the news as big sensations which shape the culture of femicide in Russia. 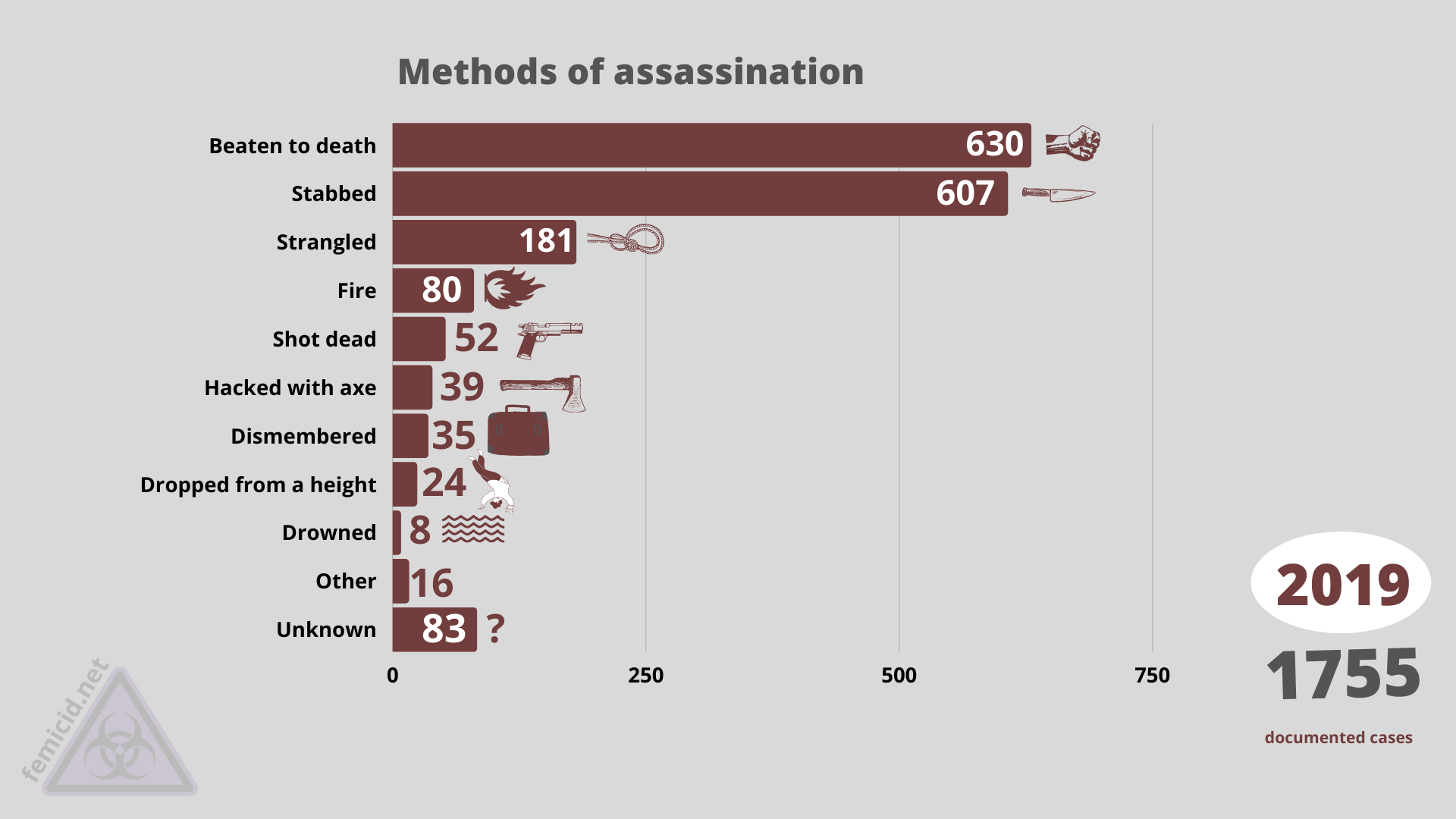 If a Russian woman is killed, it likely happens in her home or in the home of her intimate partner. Women are killed less often on the street. 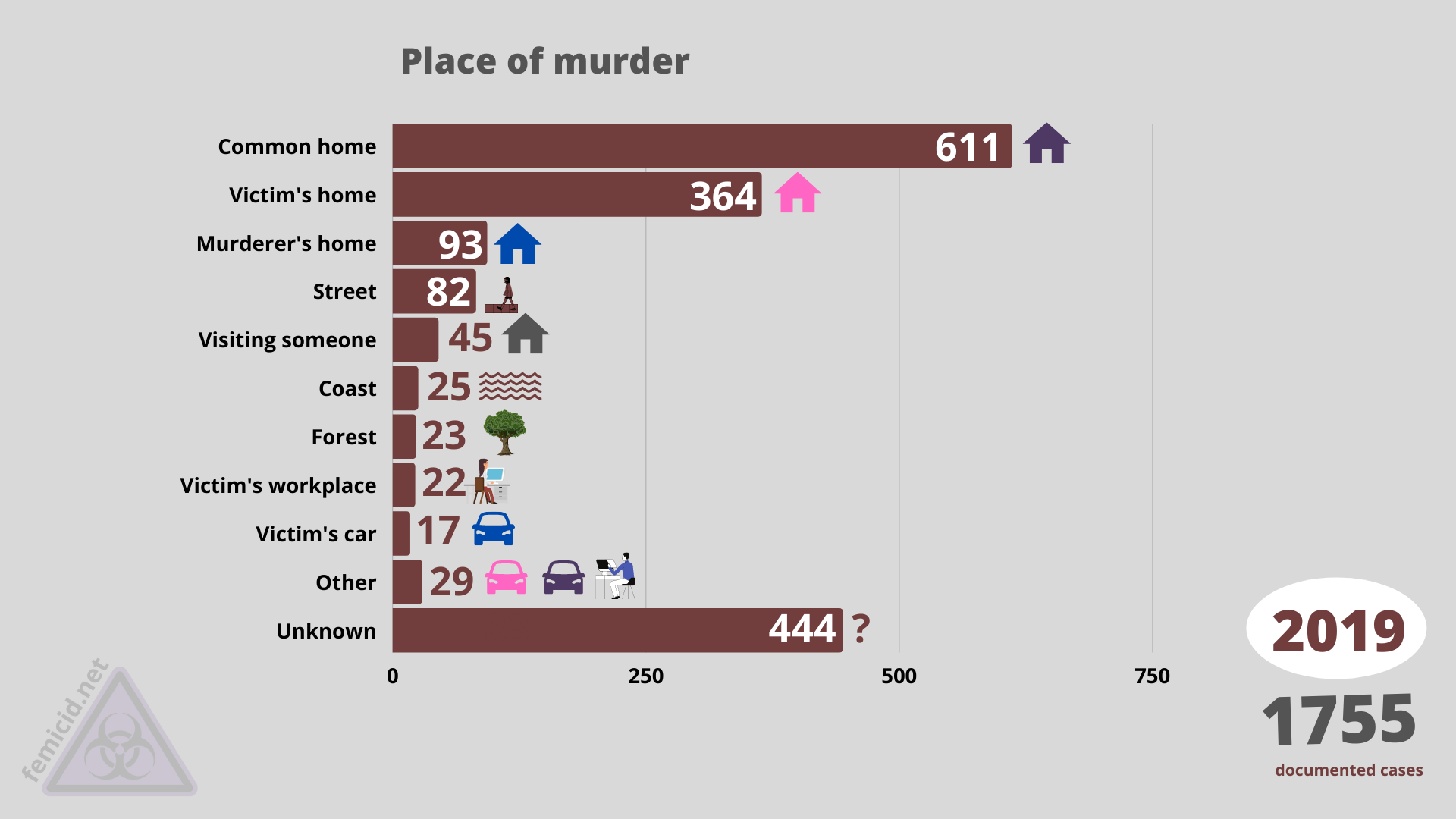 It is often believed that anyone who kills women is crazy. However this is a silly generalization and a justification for femicide. Mental illness is not the cause of femicide, but it can release the patriarchal attitudes of society. 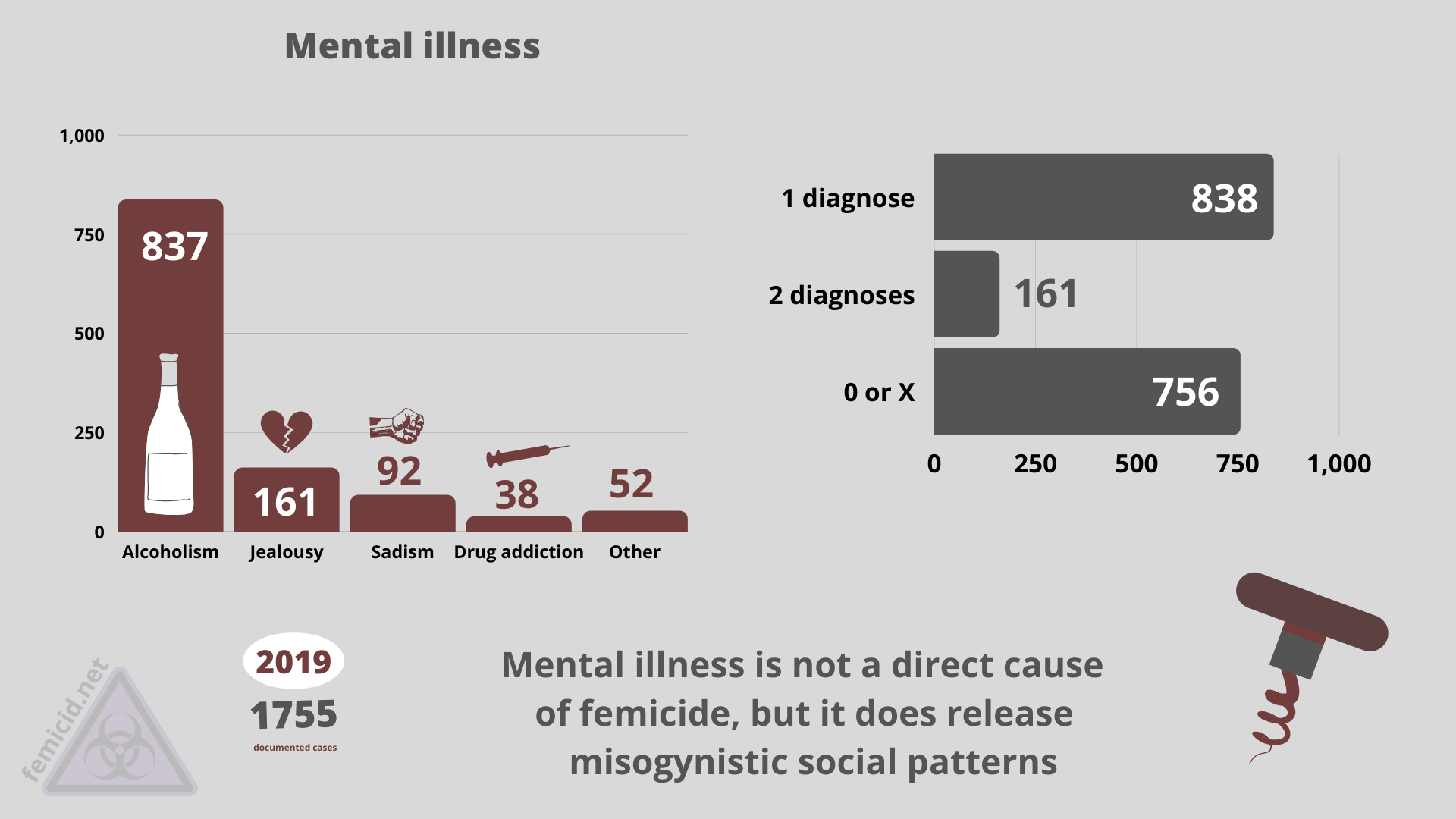 Here you can see how many cases are related to alcoholism, jealousy, systematic sadism and drug addiction. The category “other” includes gaming addiction, schizophrenia and other mental deviations. A typical stereotype in Russia is that women are killed by strangers and drug addicts in the forest. In reality it is men familiar to them that kill them, at home, and they are not drug addicts, but alcoholics. 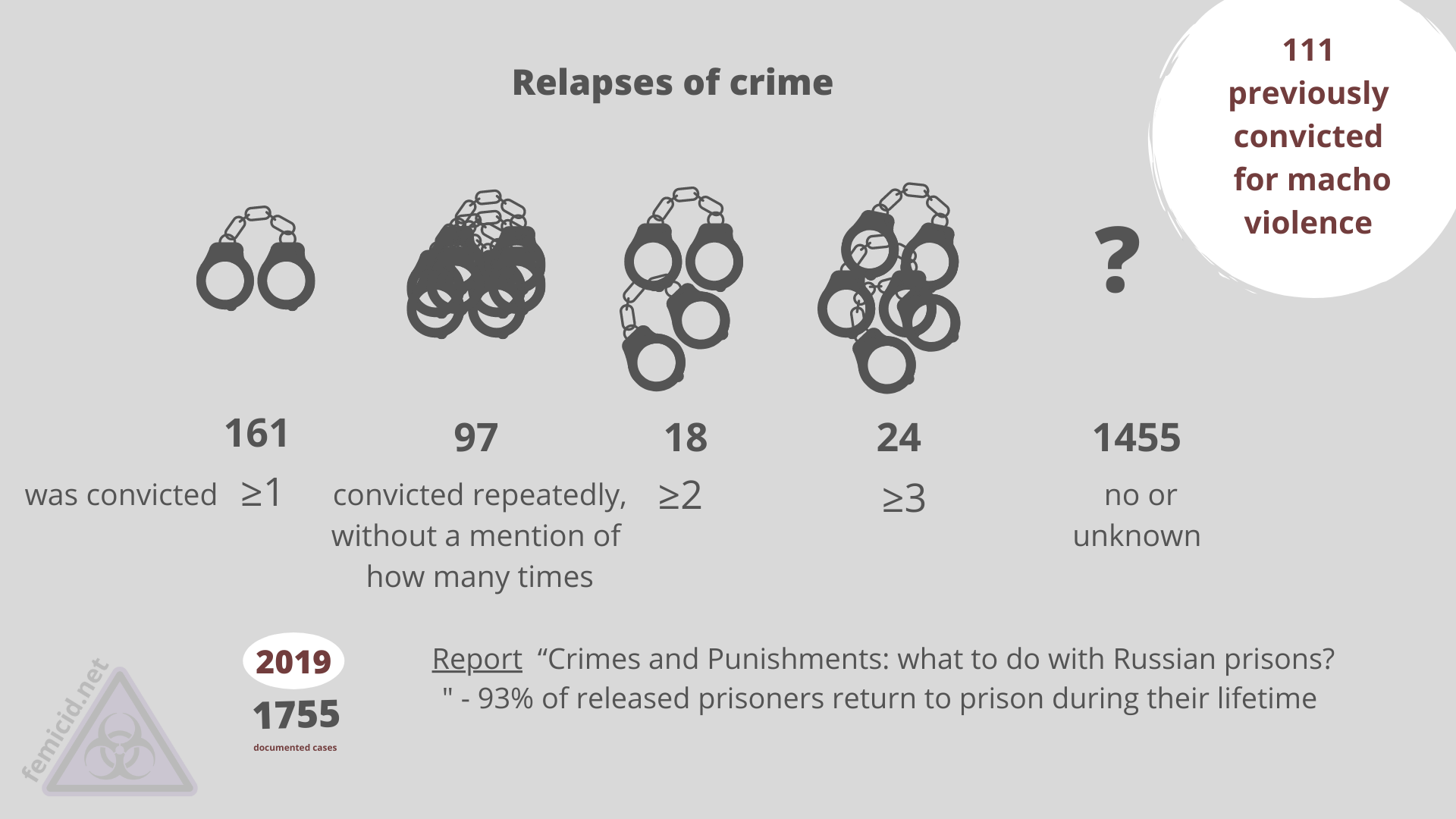 According to the report “Crime and Punishment: What to do with Russian prisons” 93% of released prisoners are sent to prison again. We have found cases when the killer was in prison 10 or more times. The law in Russia can be interpreted very broadly, and some murderers receive fines and suspended sentences, and some receive life sentences. It depends more on the corruption and passivity of society than anything else.

The Russian prison is now a femicide factory. By placing a rapist or a killer there, he learns even more cruel ideas. Then he is released from the prison without any socialization and without any kind of support or supervision. We need a reform of justice. I think the punishment for femicide should be life imprisonment. However, it shouldn’t be a prison, but more like a restricted territory without women. 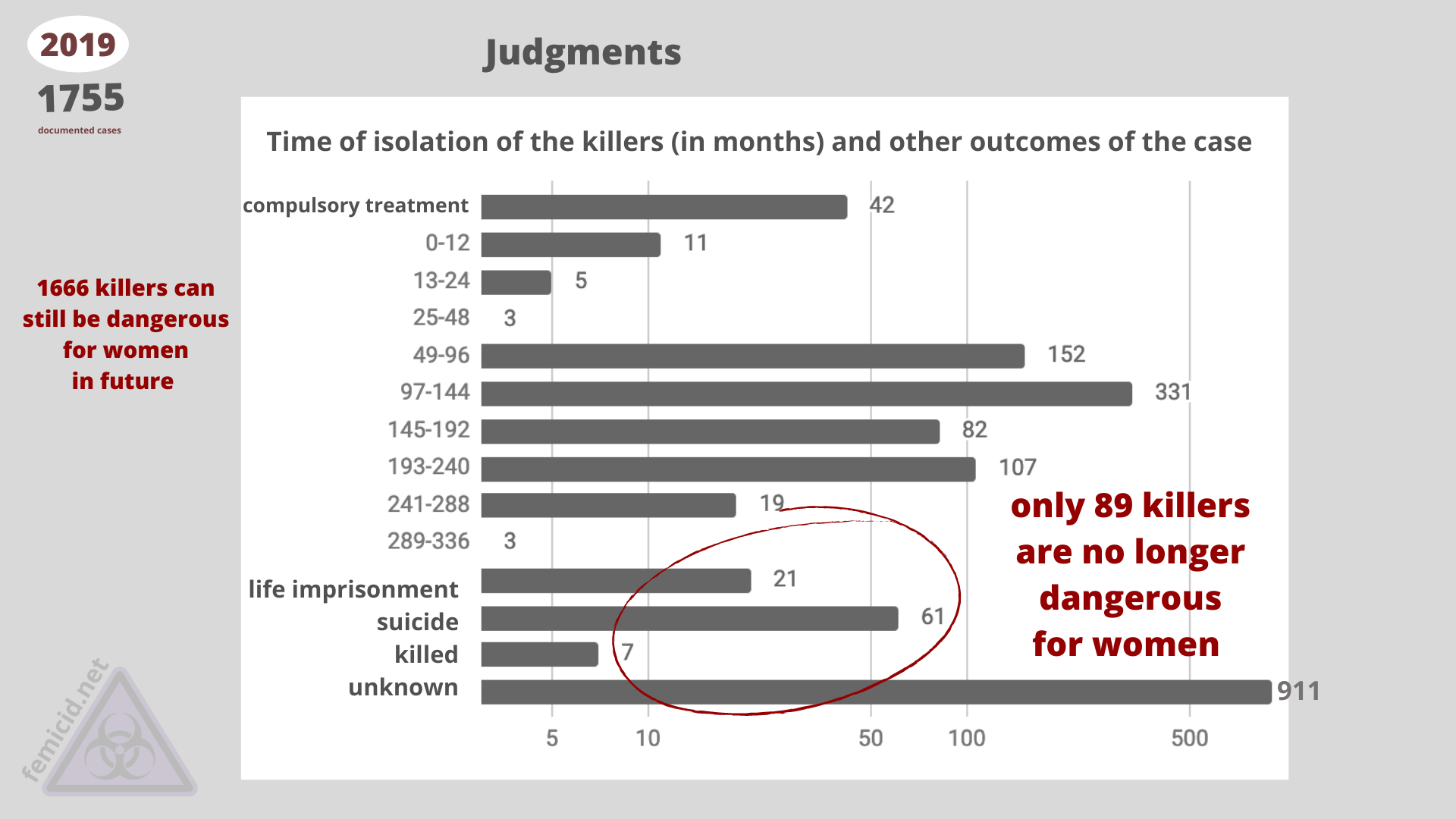 Here are prison terms for murders in 2019 in months. Only dead killers or killers who will spend life in prison (89 people in total) are no longer dangerous for women. The rest will probably kill again after they get out of prison. 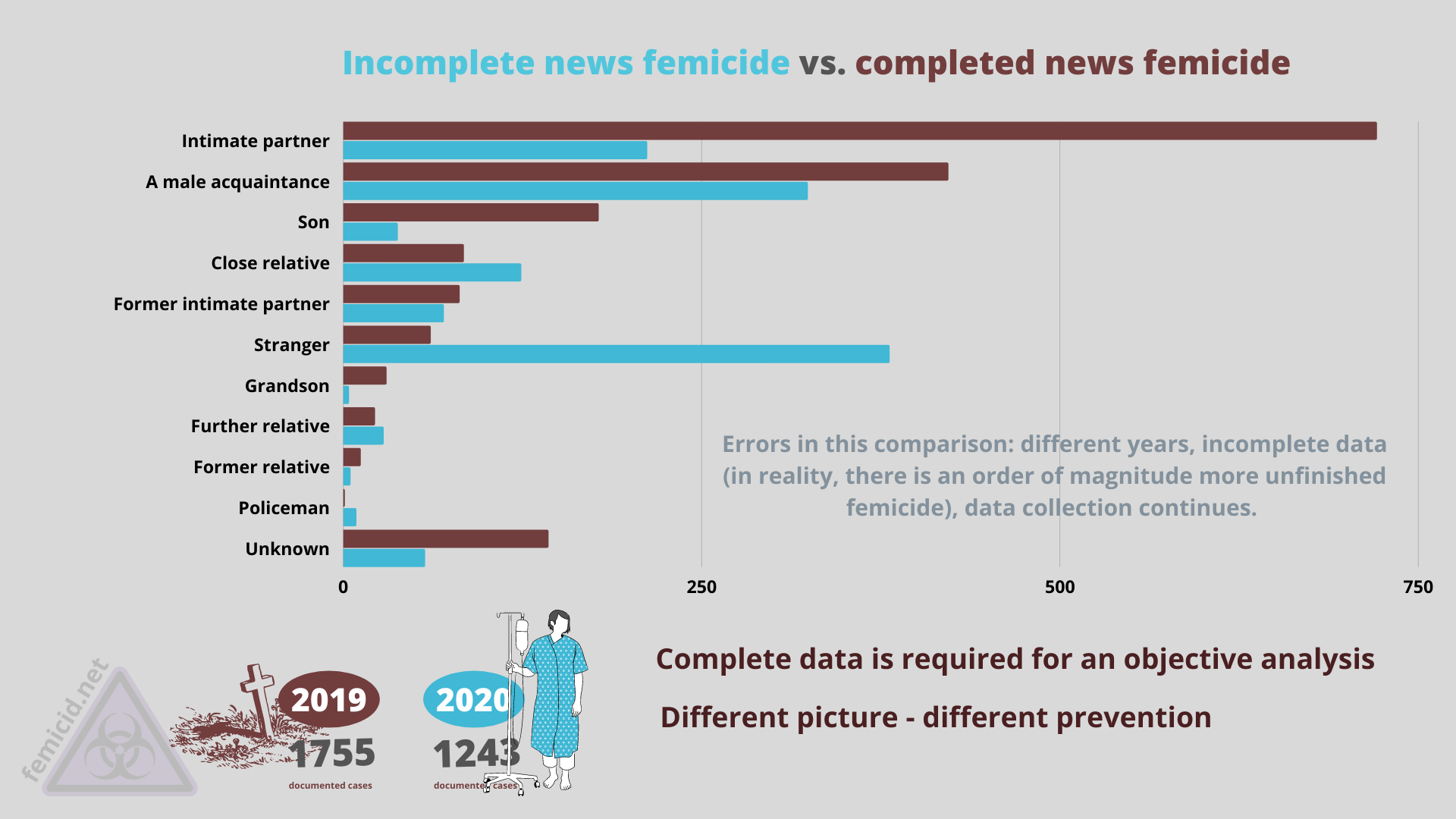 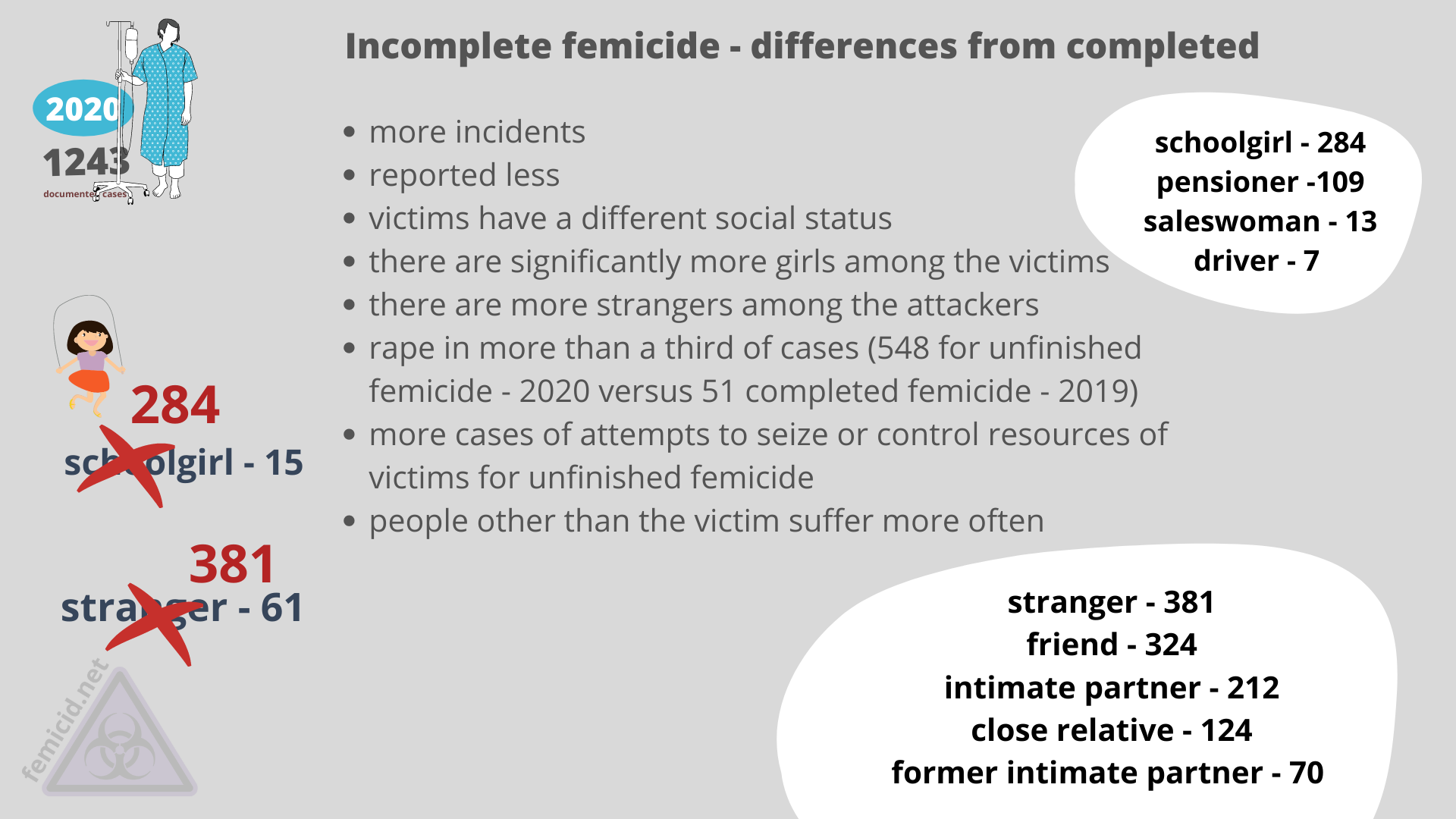 Among Russian women convicted of excessive self-defense 91% defended themselves from intimate partners and relatives. 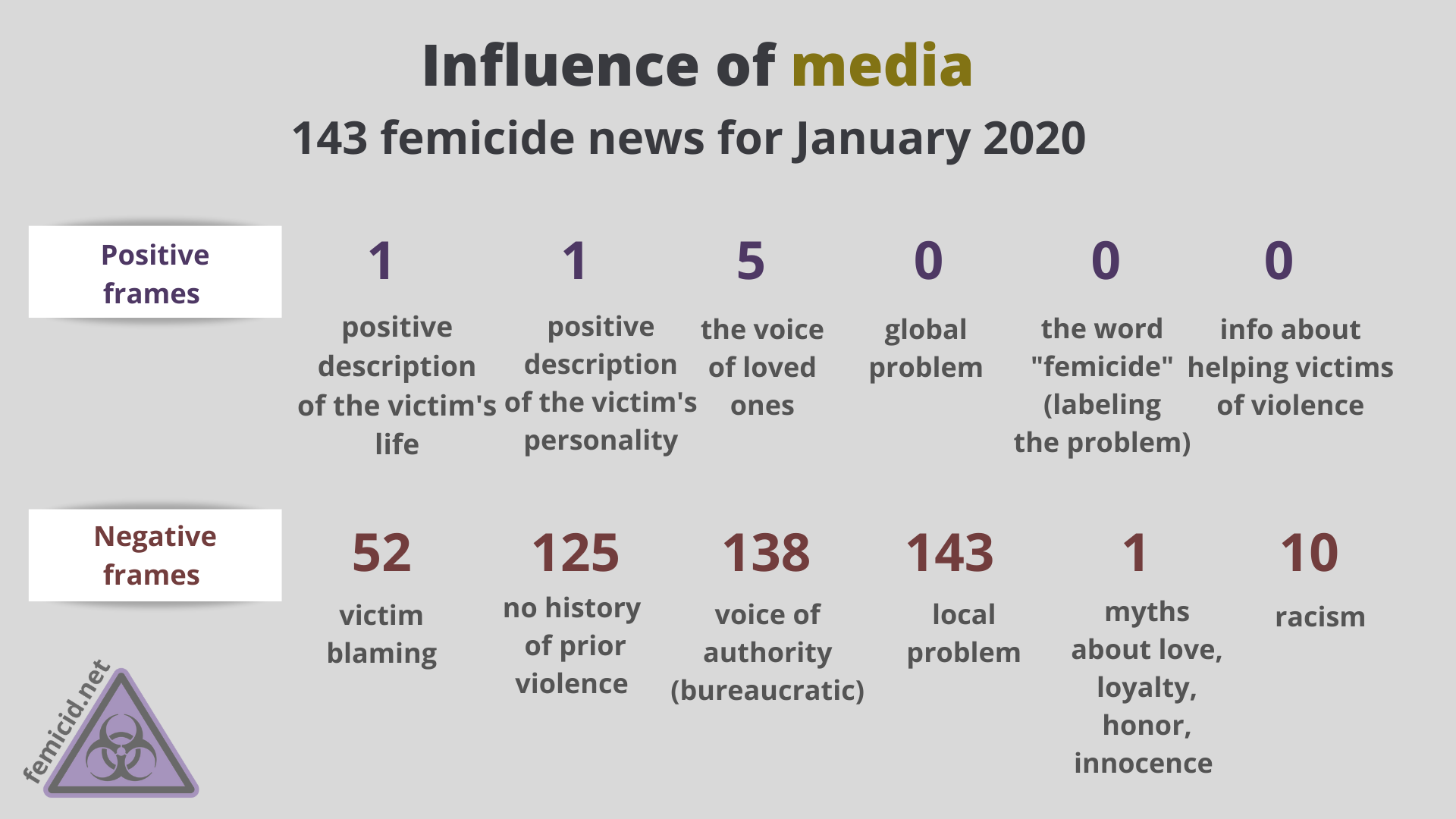 Now let’s look at media and femicide. Russian news contained mostly negative frames with very few positive frames. In this way, the news form a femicide culture. There are many studies from different countries that show this.

At last I will tell you something that typically is not associated with such research. I wrote to many journalists in Russia, but nobody, including my editor, believed that the media influenced femicide. It worried me so much that once during the night I wrote libretto to an opera. Now it is our large all-women project, opera “The Journalist”. 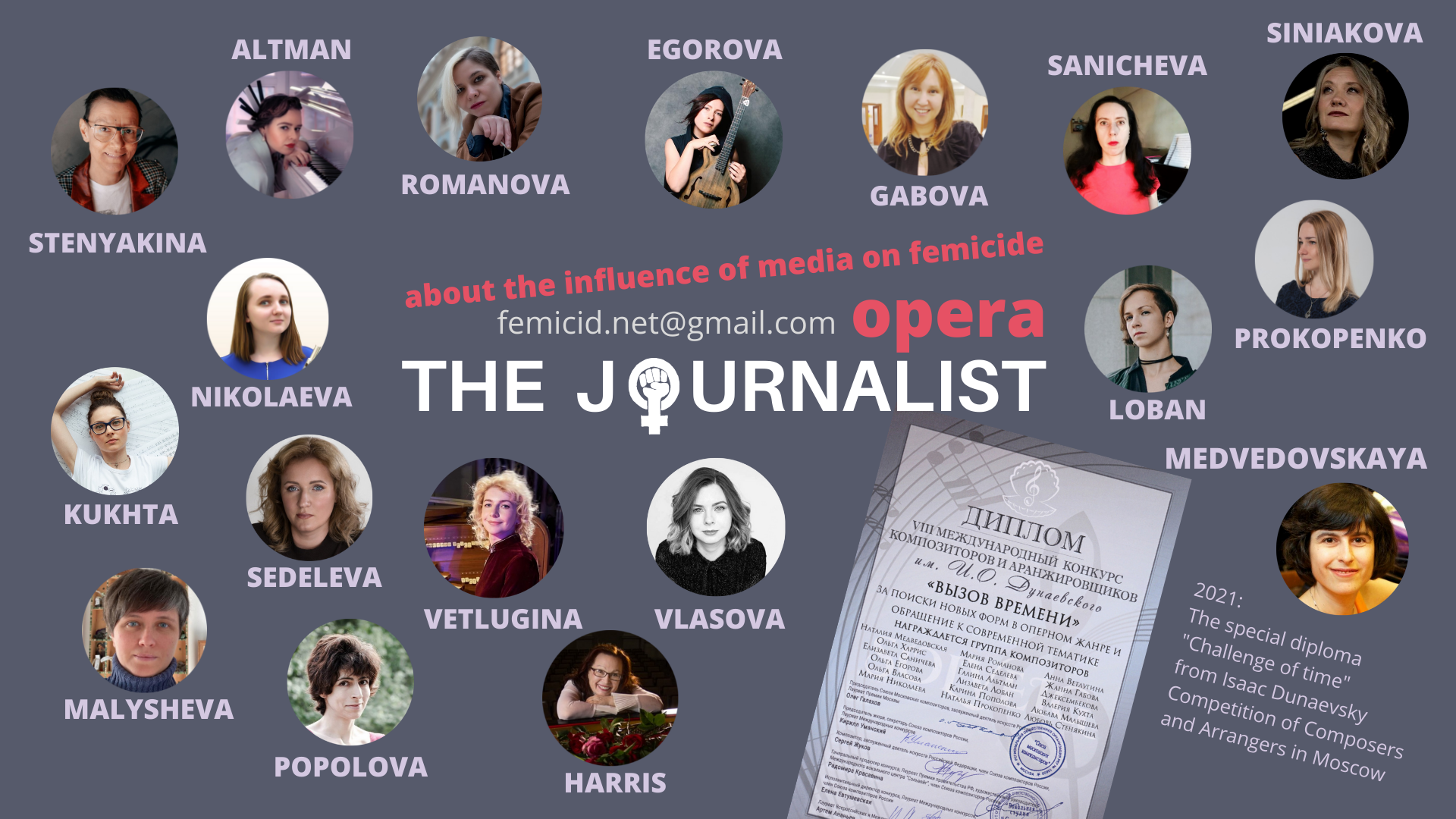 It recently received a special diploma “Challenge of Time” at a major international competition for composers in Moscow. This is an opera about the influence of the media on femicide. And we have high hopes that this opera will be able to change the situation in Russia and the world. The opera can be staged in any country and is a direct musical action against femicide.

Thank you for your attention!
Lyubava Malysheva 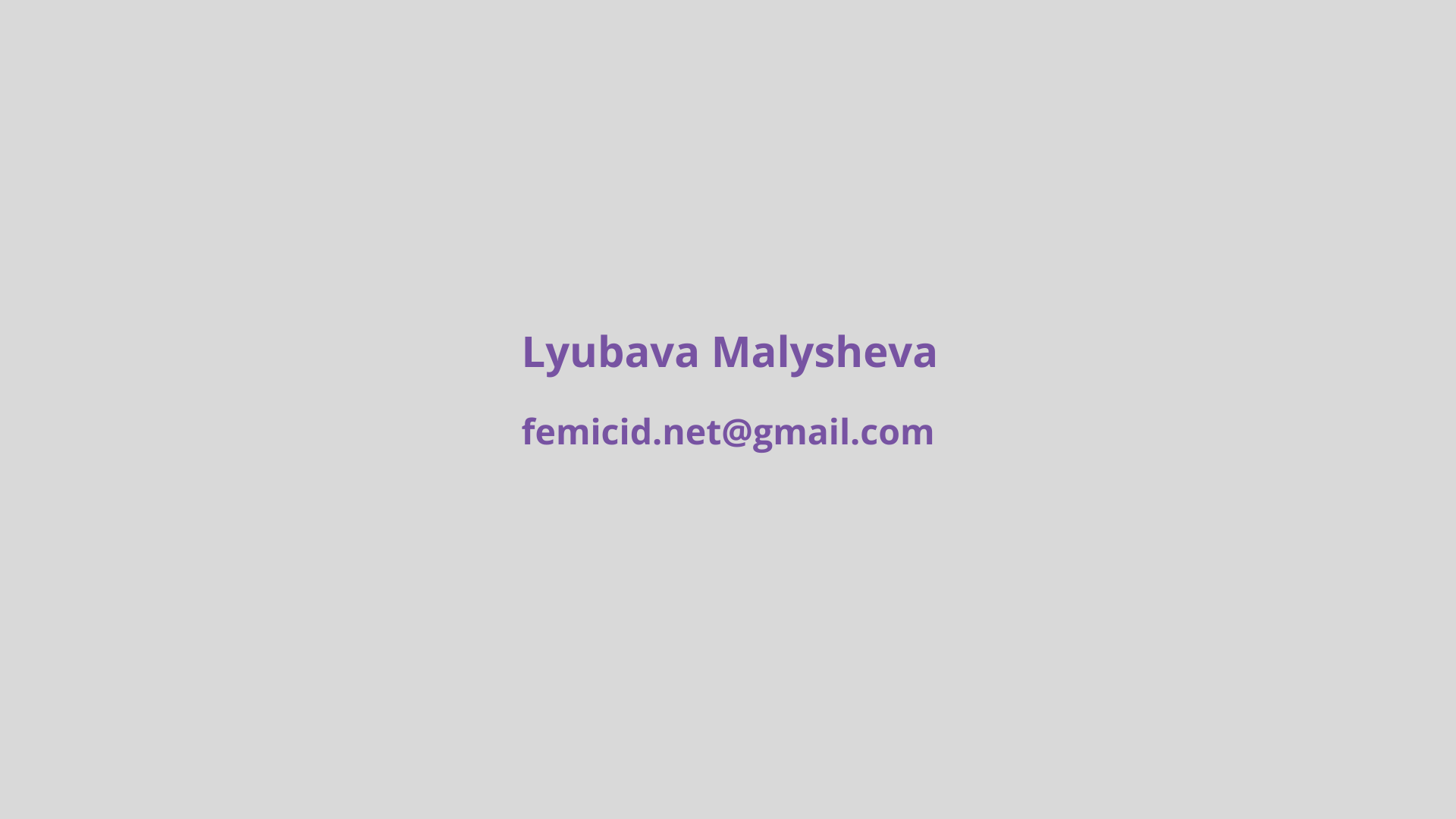 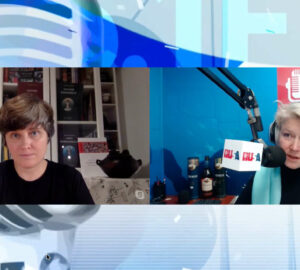 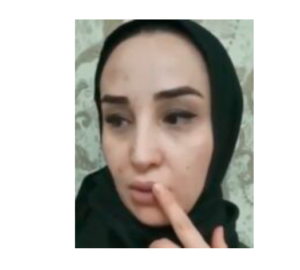 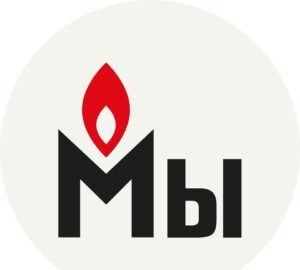